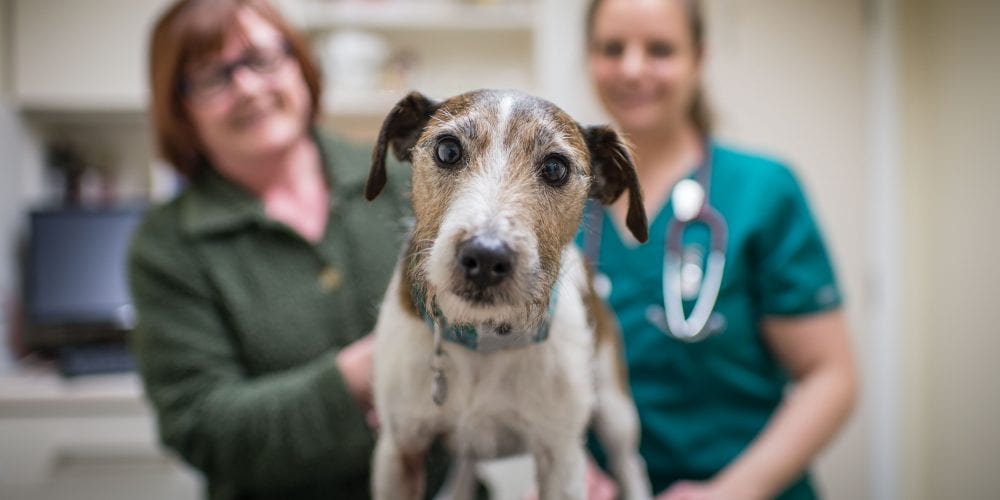 A DOG who sparked an unlikely rescue mission involving a team of vets and a binman had a lucky escape when he became impaled on a barbed wire fence.

Plucky Parson Russell Terrier Toby has since made a full recovery following his traumatic ordeal, thanks to the team at Abbeycroft Veterinary Surgery in Northwich.

The pooch had been enjoying a routine walk with his brother Marley in woodland in Sandiway on the morning of November 14 when the eight-year-old dog became trapped in a fence close to the roadside.

His owner Gail Webb, 51, from Leftwich, near Northwich, rushed over after hearing his screams and quickly realised he was impaled on the barbed wire.

As luck would have it, within minutes a passing non-clinical vet had stopped to help her and soon after a bin wagon pulled up and the driver was able to free Toby with equipment he had in the vehicle.

Toby was immediately taken to Abbeycroft, which is part of Willows Veterinary Group, where he was given painkillers before undergoing an operation the following day to stitch up his wounds.

Willows Veterinary Group offers a wealth of knowledge and expertise through 25 small animal practices, a referral veterinary hospital, two equine centres and a seven-office farm practice, located across Cheshire, into North Wales, the Wirral and Staffordshire.

Gail said: “I’ve never had a problem walking there before. I’ve probably walked it a hundred times. It was just one of those freak things.

“The dogs normally stick to the path but Toby must have caught sight of a squirrel or rabbit and took off to chase it.

“Unfortunately he’s then crashed straight into a barbed wire fence. I could hear him whimpering straight away so rushed over.

“I quickly tethered Marley to a tree and soon realised I couldn’t release Toby – he was completely impaled.

“I immediately rang my husband and then rang the vets to say we would be coming as soon as we had got Toby free.

“I’d been holding him for about five or ten minutes when a car drove past me and then started to reverse.

“A lady got out and said ‘can I help? I’m a vet’. I couldn’t believe it. She then took control of the situation.

“Within minutes the local binmen pulled up to see if they could help. They had wire cutters in their vehicle so were able to cut Toby free. It really was an extraordinary series of coincidences! It all happened within the space of 15 minutes.

“I’m incredibly grateful to everyone who helped Toby. I really want to say thank you to them all.”

She added: “The wire was impaled under his front leg, the equivalent of an armpit. He had two puncture wounds.

“I thought we were going to have to take him to the vets with the wire still stuck to him but when he relaxed it fell out.

“There was very little blood but the team at Abbeycroft said he was very lucky because there are major arteries in that area. A millimetre or so to the side and he might not be here or could have a majorly damaged leg.

“He needed an operation but because he’d eaten, they couldn’t do it until the following day. He had a painkiller and we took him home.

“He was uncomfortable and a little bit grumpy. He was obviously very sore. We dropped him off for the op the next day and then within 24 hours of having it he was running around again like nothing had happened!”

Stacey Evans, Abbeycroft Veterinary Nurse, said: “Toby was really lucky as in the end it was only a little wound. He actually had two wounds which we joined together so it healed nicely.

“It was a straightforward stitch up from our point of view. There is a little blood vessel down the leg which thankfully he missed.

“We couldn’t believe he didn’t have any other wounds. He’d done well not to injure himself further.

“It was lucky that the two people who came along were able to help and that resulted in him not being badly injured. 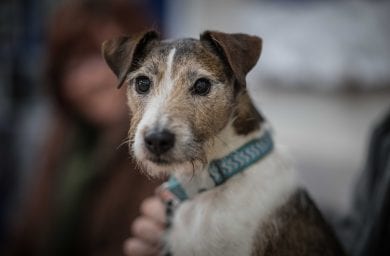 “Toby is a regular at Abbeycroft. All the staff know him and he’s a cool little character. We’re glad he’s better now. It must have been a traumatic incident for his owner.”

Non-clinical vet Jane Stewart, from Cuddington, was first on the scene and she immediately put her knowledge to good practice.

She said: “My husband and I were driving along a quiet country lane and spotted a woman sitting on the ground, next to a fence, cradling something – maybe a baby.

“I knew something wasn’t right so my husband reversed the car.

“Once I realised it was a terrier stuck in a fence, I told the lady that I was a vet and could help.  Even the best behaved dogs can bite if they are in pain so I held the dog’s mouth so he couldn’t bite anyone while my husband tried to cut the wire.

“He was having no joy at which point the bin men stopped spontaneously – we hadn’t flagged them down. Thankfully, they were able to cut the dog free.  On examination, the dog had a relatively minor injury and I was able to reassure the owner that a simple stitch up should put things right.”

Dave Milnes, from Moulton, is a support driver for Kier Group who carry out the waste collection services on behalf of Cheshire West and Chester Council.

He was on hand to cut Toby free after pulling up when he saw the commotion on the road side.

Dave said: “I was out driving with two loaders when I noticed a car with its hazard lights on and a lady slumped up against the fence with a few other people around her.

“So I stopped and went over. The dog was trapped but seemed to be dealing with the situation quite well. There was another gent there trying to release the dog but wasn’t making much impact with his multi-tool.

“I went back to the truck and got what are basically heavy duty pliers. I picked them up for situations like this. It took a bit of pressure to get through the wire but eventually, it worked.

“The dog wasn’t thrashing about or barking or anything, he was taking it all remarkably well. You see unusual things when you’re out on the road but cutting a dog free from a fence is a first!

“I’m glad to hear the dog is OK now and happy I was able to help.”